This workshop is for Entrepreneurs, Managers, Sales personnel, Employees, Parents, Students, Home makers and anyone who wants to experience and practice the skills of NLP for their Professional Development and Personal Achievement.

This is a comprehensive program and enables the participant to get personal transformation in their own life and also to get started as a Coach (Executive Coach, Life Coach, Leadership Coach and more). We make NLP learning possible the NLP way.

✔ Sales Personnel learn to communicate effectively and persuasively with clients

✔ Employees learn to interact effectively with peers and Supervisors

✔ Parents learn how to guide their children to a better future

✔ Students improve their confidence and perspective

✔ Coaches get to learn models, techniques, and processes to follow that help bring about change and help people get what they want from life and achieve excellence

NLP can help you improve your communication and influence skills quite significantly. Not only that but practicing NLP techniques will increase your resilience and your ability to master change – just as working out in a gym will build your physical strength, flexibility, and endurance.

In business, NLP can improve your results by helping you improve your leadership, sales, management, and relationships skills. In your personal life, it can help you connect to your purpose, overcome blocks, and help you navigate your own hero’s or heroine’s journey.

The story goes that the name Neuro Linguistic Programming originated when co-founder Richard Bandler was stopped by the police for alleged speeding. He was asked his profession and came up with the name on the spur of the moment after glancing at the titles of some books in his car. Despite this, the name gives a useful description of what it is about.

NEURO means relating to the nervous system. The information we take in through our senses influences our neurological function. If we improve the accuracy with which we take in information, i.e. we listen better and are more observant, so we are more open to our own and other people’s experience. This means our brains have better information to help make decisions. We also increase our ability to communicate effectively – both consciously and unconsciously.

LINGUISTIC is about language. As we understand and are more aware of language – the words themselves as well as their structure and the way they’re spoken (speed, voice tone, rhythm) – so we get better information for making decisions and communicating consciously and unconsciously.

So in short Neuro Linguistic Programming is about using language to program our nervous system into more useful habits. Success is often about developing the right habits in any situation.

Neuro Linguistic Programming was created in the 1970s by Richard Bandler and John Grinder. They studied and worked with some of the most talented psychiatrists and therapists of the day: Milton Erickson, Virginia Satir, and Fritz Perls. Contrary to most of the academics at the time, however, they took a different approach in that they focused on bringing about measurable change, rather than merely theorizing.

Bandler and Grinder wanted to know the psychological strategies great performers used – what they did and how they did it. They devised ways of modelling these strategies so others could replicate their performance. They then tested and refined the model with their clients. As different groups heard about its benefits it spread across a whole range of human endeavors, including coaching, art, sport, and business.

John Grinder and Richard Bandler, the fathers of NLP, called their model ‘neuro’ because the patterns that they discovered were at the level of our neurological processes.

“Linguistic” to represent the ways our language reflects our neurology, and “programming” to reflect our ability to break free from our programmed behavior and choose to organize our ideas and actions in the way that we want.

What You Gain By Using NLP

You use NLP to enhance your ability to behave positively and constructively. NLP techniques help you develop rapport, connect with others, and communicate and understand others. With it, you can use language skills and patterns to ask powerful questions and to achieve positive outcomes.

NLP helps you to understand the outcome that you want in a given situation, and to develop sufficient awareness to know whether you’re moving toward or away from that outcome. It teaches you to be flexible about changing your behavior, so that you can achieve the desirable goal.

For example, you may want to negotiate a business contract successfully. NLP can help you become more aware of what you are saying, how you are saying it, and whether or not the other person is engaged in your presentation. Through this awareness, you can shift your behavior or your speech to re-engage them, if necessary, and to achieve your goal successfully.

Here’s another example: while in a difficult discussion, you can use NLP to help you shift your perception and imagine yourself standing in the other person’s shoes. This can help you to better appreciate where they are coming from. Similarly, to wrap up the discussion, you might take a “helicopter view” of things to get a sense of the bigger picture, before zooming back down into the detail and agreeing the final outcome.

NLP can also help you to increase your confidence levels in public speaking. By exploring your internal state when you are feeling confident, you can map these images and sensations across to situations in which you are less confident. Your unconscious mind picks up on these subtle shifts and increases your confidence.

Although most of us are probably very good at creating rapport and connecting with others, we all experience times when things do not go as well as we would like. For example, if you’re having a difficult meeting with an unhappy client or asking your boss for a pay raise, NLP can help you to foster a positive rapport with the other person, which can ease the flow of the discussion and improve the likelihood of a good outcome.

Mirroring someone’s body language, tone of voice, or even rate of speech can help strengthen your rapport with the other person. Unconsciously, the other person picks up that you are like them – and we all tend to like people who are like us.

You can also connect with others by speaking the same language. We take in our experiences through our sight, hearing, feelings, and even our senses of smell and taste. Our speech reveals our preferred sensory language in a particular context.

Have you ever heard someone say, “I see what you mean,” “I get the picture,” “I hear what you are saying,” “That rings a bell,” “I’ve just got a gut feeling about something,” or “I’ll be in touch”? Developing the skill to pick up on this sensory language will help you to modify your use of words.

Additionally, by developing an awareness of the subtle shifts of body language, you get an insight into what may be going on with the other person. What do shifts in posture (tall or slumped) tell you? Have you seen someone’s face turn red while they get nervous, or go deathly pale after hearing upsetting news?

By delving further into the mechanics of language and how people communicate, you can identify patterns that help you to understand human behavior. Are they distorting, deleting or generalizing? Do they like options, or prefer to follow procedures? Knowing what motivates people can help you deal with them.

Some people believe that NLP involves manipulating others into doing what you want them to do. For example, a pushy salesperson persuading you to buy something you really did not want. However, it’s the use of the tool that determines manipulation, not the tool itself. If the tool is used to disadvantage someone else, then this is manipulation. If it’s used for his or her advantage, then the tool is being used in a positive way.

Another misconception is that NLP is used to detect whether someone is lying by watching their eye movements. Part of developing your sensory acuity is about picking up subtle eye movements and understanding that different movements have different meanings. However, since the meanings associated with every individual’s eye movements are unique, you need to understand what they mean before you can even begin to use NLP for this purpose. It is far from being a quick and simple lie detector.

PROGRAMMING YOU FOR SUCCESS

By using NLP techniques, you can speak the language of your audience so that your words have a greater impact; and create effortless change by identifying behavior that may be preventing you from achieving your goals. In short, NLP helps you to program yourself for SUCCESS.

All certifications are accredited under ABNLP (American Board of NLP, USA) and run as per the Code of ethics laid down by ABNLP and ANLP
(Association for Neuro-Linguistic Programming, UK).​

Powerful advantages when you enroll now

Early Bird Bonus
Typically at every training program, we offer our early-bird participants a significant enrollment discount. This is done to reward everyone who’s taken the time out of their busy lives to commit to their learning and attended the training.

Yes, this is just for you as a token of appreciation for joining our NLP tribe. You’ll be part of a special PRIVATE community interacting with fellow participants through a closed WhatsApp Group and FREE to attend Quarterly Meetups.

(ABH approved, The American Board of Hypnotherapy)

Attend 7 days of training + complete book reading assignments and submit review* (please contact us for more details)
*E-books will be provided. Review of the book(s) to be submitted in minimum 3,000 words for each book (summary of your learning’s and understanding from the book). 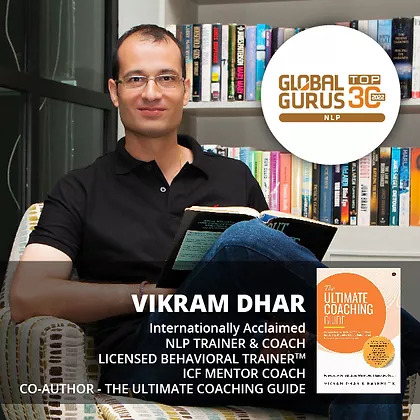 ​Vikram been listed by Global Gurus in the World’s Top 30 NLP Professionals for 2021. He has also been listed among the top 100 coaches globally both in 2017 and 2020 and was presented with the “Talent Award” during the world coaching summit for his tremendous contribution to the world of coaching. He has co-authored the book “The Ultimate Coaching Guide”.

He is the founder of “NLP Coaching Academy”, holds a Master’s Degree in Computer Science from Bradley University, USA and is a modern day Business Growth Hacker and a Business Coach. In his corporate career, he has worked with market leaders in many roles, including but not limited to IT Risk Management, Cyber Security, Business Sales, Leadership & Team Development and Leadership Coaching for over a decade and half.

If you’re excited by the potential of transforming your life, we invite you to enroll in this program now.
You get intensive training, powerful resources, and more.