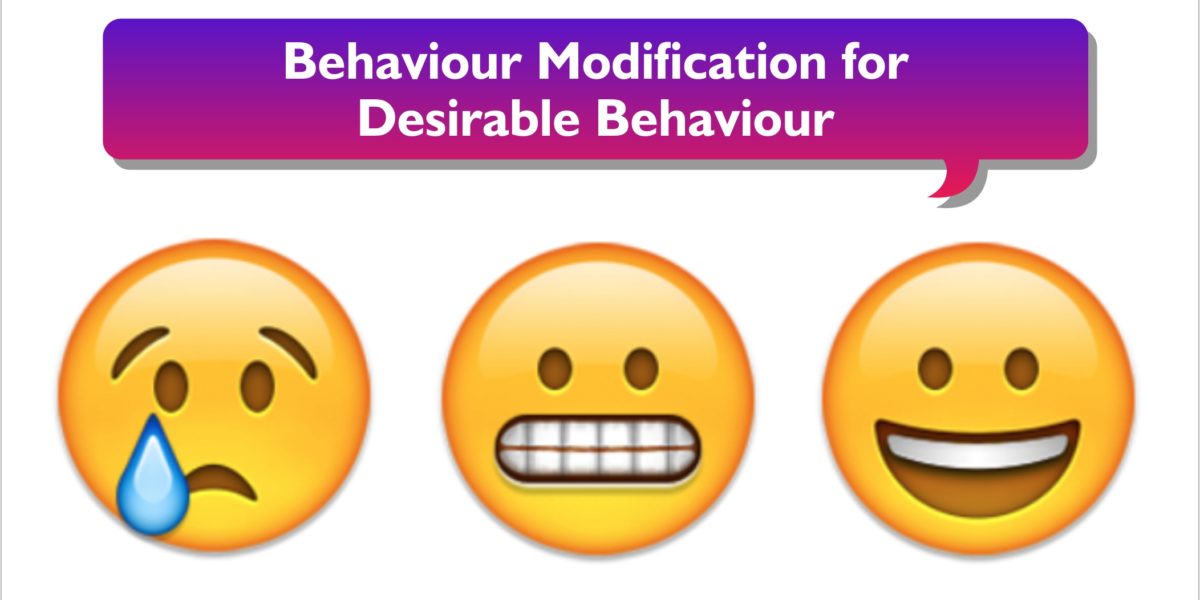 Sounds interesting, doesn’t it? What does this refer to? The meaning is quite simple. Behaviour modification means conditioning one’s behaviour to reap positive attitudes. In simple words, it means, exchanging undesirable behaviours for more suitable ones, using various techniques and processes. These modification techniques could be used to change different behaviours, simple or complex doesn’t matter. It could be just as simple as wanting to wake up early in the morning or to stop procrastinating to more restrictive behaviours like stopping an alcohol or smoking addiction. It’s all about understanding wrong behaviour and making it right, to be successful and content.

These undesirable behaviours could affect both, our personal as well as professional lives. For example, if you are a person who always procrastinates, how can you ever complete any given work on time? Or say, you get angry for every small reason, how can you succeed in relationship management? So many such areas, big and small, for behaviour modification techniques to be adopted in order to make our lives better and purposeful.

What is Behaviour Modification?

B. F. Skinner, an American psychologist, behaviourist, author, inventor, and social philosopher, came up with the theory of Behaviour Modification. In his theory, he has considered free will an illusion, and states that, human action is dependent on consequences of previous actions. If the consequences are bad, there is a high chance the action will not be repeated; if the consequences are good, the actions that led to it being repeated become more probable. Skinner called this the Principle of Reinforcement. Skinner’s theory of behavioural modification seeks to change or shape behaviour through a set of stimuli and response actions. But you have to be first aware that there is a problem or identify those behaviours you want to change.

In a Behaviour Modification process, various techniques are used to try and change a particular type of behaviour. If we look carefully, this process takes place in our everyday lives too. Have you been scolded or punished by your parents/teachers when you were a child for some wrong behaviour? And maybe, you are doing it with your children too. Parents and teachers have been using various techniques to change children’s undesirable behaviour patterns into desirable ones, since centuries. Using these techniques, they teach children to understand right from wrong. Many of these techniques are used by Therapists, Trainers, and so on, to achieve desirable behaviour patterns.

How does the process work?

Since the desirable outcome of behaviour modification is replacing negative or undesirable behaviour with positive or desirable behaviour, a set or system of positive and negative consequences for an unwanted behaviour is introduced. An individual thus learns the correct set of responses for any given stimulus which can also be called altered behaviour. Behavioural Trainers have been using such techniques to garner wanted reactions and behaviours from employees. Application of these techniques have come as a boon to many working professionals and organisations, helping in sustained growth and success for them. </

This process is so strong, that use of these techniques in treating disorders like attention deficit hyperactivity disorder, obsessive-compulsive disorder, phobias, separation anxiety, generalized anxiety disorder, disruptive behaviour and autism, among other conditions, have been successful.

Classical Conditioning– involves learning a new behaviour by linking the process to some kind of association. This type of conditioning relies on a particular stimulus or signal which are linked together to produce a new learned response in a person or animal.

Some classic examples of classic conditioning would be: 1) As we see in circuses, the ringmaster cracks his whip, which produces an instant reaction from the animal, and he will perform what act is required. 2) If a child is punished by putting him in a dark room, he will always be apprehensive of the dark. 3) If a student is ridiculed for wearing spectacles, he will dislike wearing spectacles, probably for the rest of his life or until his behaviour is conditioned into a more desirable one. All of these are reinforced by the conditioning they receive.

Operant Conditioning could be defined as a form of learning in which a response increases in frequency as a result of its being followed by reinforcement. For example, when a parrot is given a chilli as a reward if he speaks, he will do it again and again consistently, with a hope of getting the reward again.

Another example is, if an employee is rewarded by his employer for the good work he has done, his performance will keep getting better and better. Or if a child is punished for bringing in bad marks by taking way his video game for a period of time. In this case, most of the time, the child will try to do better each time, in fear of losing his video game if he doesn’t.

To put it simply, in Operant Conditioning, there is a response that is followed by a reinforcing stimulus, and which is likely to occur again and again.

Some Reinforcements one can adopt.

1. Positive Reinforcements – Human beings and animals respond positively to praise and recognition. Providing Positive Reinforcements involves providing a ‘reward’ experience when someone does something desirable. This conditioning can be done on self too. For example, if you are trying to wake up early and have been doing so consistently for a week, treat yourself to a movie during the weekend, as a reward.

The NLP technique is a study of communication; with the conscious and unconscious mind. In this technique, behaviour is altered using various tools and techniques like submodalities, metaprograms, and so on. This is a powerful tool to reinforce desirable behaviours and works on a person’s subconscious to consciously enable a positive change.

A very effective practice to induce behaviour changes. Meditation improves brain function, memory and focus. It enables the left brain portion to interact and be in focus with the right brain hemisphere. Meditation alleviates anxiety and depression, thus helping an individual to become more focused which enables better decision making and consistency. Both the brain and body are in tandem which enables a spirit of well-being.

5. Cognitive Behavioral Therapy (CBT) – is a short-term psychotherapy treatment that takes a hands-on, practical approach to problem-solving. In this therapy, the root cause behind people’s difficulties are analysed. CBT’s goal is to change patterns of thinking or behaviour behind these root causes and change the way people feel about them. CBT is used to help treat a wide range of issues in a person’s life, from sleeping difficulties or relationship problems, to drug and alcohol abuse or anxiety and depression.

6. Emotional Freedom Technique (EFT). This is a revolutionary technique and is also known as Meridian Tapping. Breaking all the conventional rules of Psychology, EFT contends that the cause of all negative emotions is a disruption in the body’s energy system. Negative or undesirable behaviour also termed as short circuits occurs when there is a shift in the body’s energy system. To bring it to a healthy balance, drumming is carried out on certain areas of the body, which help release these short circuits, to bring about the desired results.

7. Ignoring – Effective most of the time, an unwanted behaviour can be modified through ignoring the act. For example – if a person has a tendency to irritate or be disruptive, by ignoring him or his behaviour, there is a probability that you will reduce its tendency for appearing again. People generally don’t like being ignored. When you do so, the message is read loud and clear and the person stops the undesirable behaviour.

What are the steps in a Behaviour Modification Process?

One has to first

After which, one can:

Behaviour Modification is a powerful tool to change any unwanted behaviours into more positive and productive ones. So powerful that it can be used to treat any kind of behavioural, stress related or mental issues successfully.

Want to change some undesirable behaviour into more positive ones. Just do it.

NLP Training Dubai (www.nlptrainingdubai.com) – powered by UV Consultants, is a global NLP training & coaching platform which offers quality NLP training and coaching certification programs in Dubai and other locations across the middle east. To know more about our NLP & Coaching programs, please write to nlptraining@uvconsultants.com or call +971 4 8525752 | +971 50 670 5615.